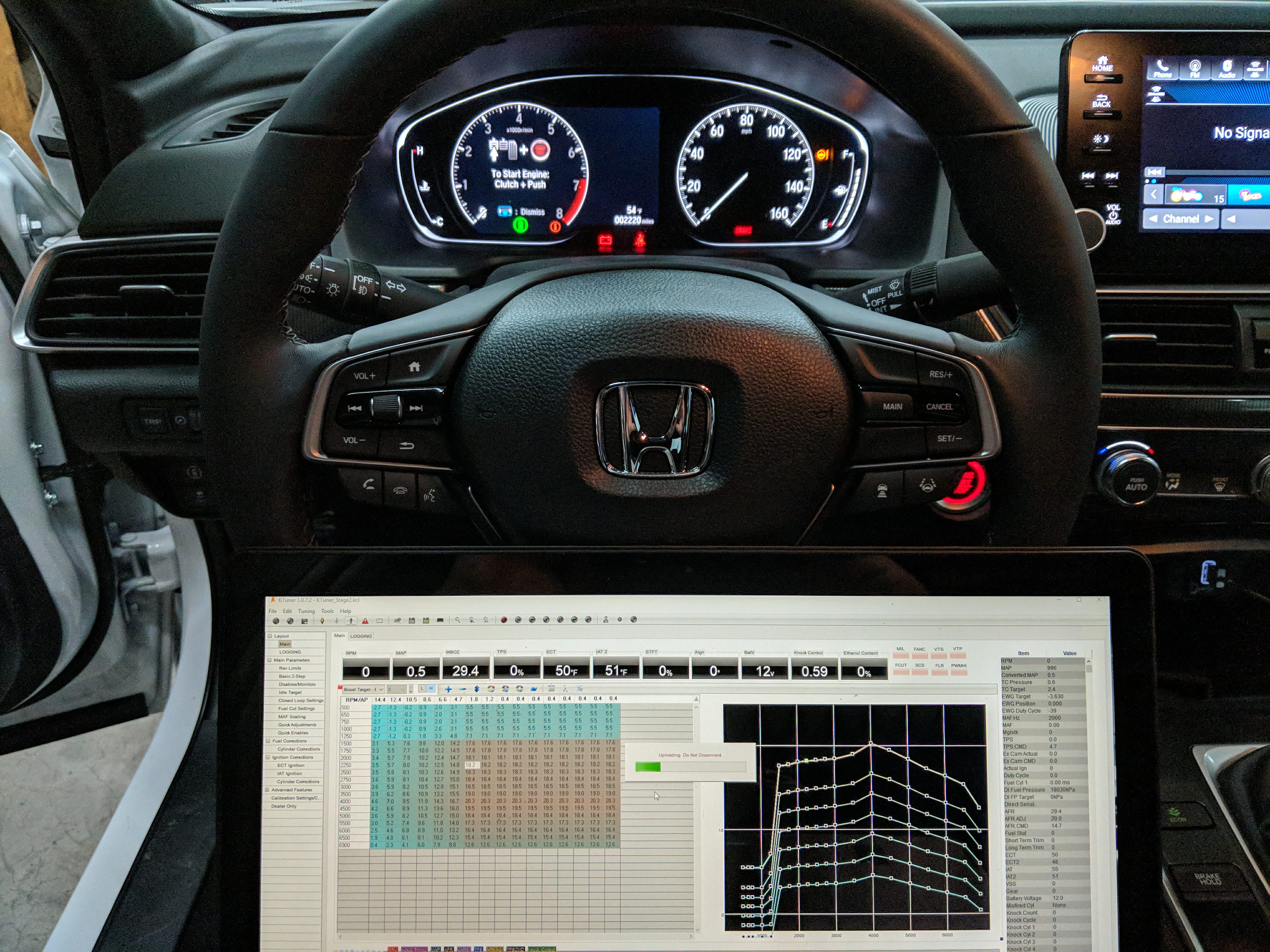 2018 brings some major changes to the Honda Accord. In recent generations, a naturally aspirated four cylinder K24 engine was the standard engine option, while variations of the mighty J-Series V6 provided a healthy bump in grunt to one of Honda’s most awarded platforms. Now, a 1.5 liter turbo engine is standard, and a variant of the Civic Type R’s venerable 2.0 liter turbocharged powerplant motivates the car as an upgraded driveline. Over the course of the last year we’ve grown quite fond of the 1.5 turbo engine’s abilities, so we were very excited to begin scratching the surface of the capabilities of the “everyman’s” 2.0 turbo K20C engine.

This tester was graciously provided to us in a time when these cars are still fairly hard to find. It is a 2018 Honda Accord Sport 2.0T model, fitted with a six speed manual transmission, with 2,000 miles on the clock.

Testing began with the stock ECU calibration; both on 87 octane fuel (which is realistically what 99% of buyers outside of the enthusiast market will end up using, undoubtedly), and with 93 octane fuel (for those of us that understand the fun of fuel quality).

This thing is a stump puller from as low as 1,500rpm. The turbo responds almost instantly to throttle input when loaded, as evidenced by the start of the run’s massive torque figure. As you can see, the difference from 87oct to 93oct on the stock tune file is a result of the different knock control levels present (the ECU pulling ignition advance out). Overall? Very stout starting point for an engine that’s 1.5 liters smaller than the outgoing ‘king of the hill’ J35 V6 engine.

Next, we wanted to test the KTuner “Stage 1” calibration, which makes numerous drivability, fueling and boost pressure changes.

Big gains from the “Stage 1” tune, and a much flatter torque curve. over stock. The midrange is SUPER healthy over the stock tune file. This calibration also retains the “ECON” mode, and lowers boost levels to stock for when you want to be “less race car.”

Next up? The whole reason we tested; to aid in the development of the KTuner “Stage 2” tune file. This also raises the boost pressure a little more over the “Stage 1”, as well as some small ignition adjustments that aid in smoothing out torque delivery after 5,000rpm.
Not wanting to press our luck with low end torque, boost is ramped in easy, picking up some gains everywhere.

The “Stage 2” tune shows a torque gain of 88ft-lbs at 3,200rpm over stock, with gains carrying the entire curve.

Next, let’s see how the Accord 2.0T stacks up against some other Honda engines…

2018 Accord 2.0T versus a stock 2017 Civic Type R.
As you can see, the Civic Type R is an animal compared to the people-mover Accord engine in stock form (as expected). Power carries much better up top as a result of the internal engine differences and turbocharger differences between the two engines. The Accord makes torque earlier, though.

KTuner “Stage 2” flash versus a stock 2017 Civic Type R.
The reflash makes the CTR play catch-up until about 5,200rpm, where the superior flow of the CTR results in an almost 50hp advantage at redline.

Here’s a comparison of the “Stage 2” Accord versus a stock 2017 Civic Si with custom KTuner tuning on 93oct. A great example of displacement at work.

Stage 2 Accord versus the same 2017 Civic Si with an ethanol fuel blend (35% ethanol) and of course, custom KTuner tuning.

And finally, a comparison of the 2018 Accord 2.0T with KTuner “Stage 2” flash versus a 2016 Accord V6 6MT with bolt ons (PCD’s, J-Pipe, exhaust, intake) with custom KTuner tuning. The turbo car make a boat-load of torque over the mighty J35 until about 5,000rpm, where the “big” V6 keeps carrying it’s torque flat, ultimately resulting in a power advantage way up top.

 In conclusion, the 2.0T engine is very exciting, and the aftermarket is just getting started with this platform. As far as this engine’s ability to be a Civic Type R K20C stand-in on a budget, we don’t feel it’s on the same level, but only time will tell!