What does it mean to stress test? Is it the test of time, mileage, reaching the limits, or going beyond them?

With Honda making some huge changes for this Civic platform we had a clear goal in mind… Figure it out. New ECU, new engine, factory turbo, CVT. All of it.

In February of 2016 we went to a local Honda dealership and took one out for a test drive. “Wow”. Not what you’d think… Personally I was surprised by the CVT programming. Fantastic! Having tested with their CVT Accord, CVT Fit, this was a completely different feeling. Engaging. It was sporty and more on the realistic side. In the test drive I think I tested more with the shifting and different CVT engagements than I did testing for wide open throttle power. Such potential all around. We bought one and took it home at the beginning of March. 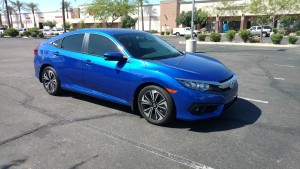 We drove it back with 8 miles on the clock. Took the long way back and spent the entire trip gathering data on the stock tune. We couldn’t wait to flash it for the first time.

It was the plan to beat on this test vehicle right out of the gate to see if it would last through rigorous abuse long term. 60, 70, 80, 90 miles as we made changes and recorded WOT runs. We ended the first day at 150 miles and boost levels above factory.

The next few weeks were spent on daily testing. When I say testing I mean WOT pulls. Launches. 0-60 testing. Tweaking of maps. Trial and error of newly identified tables. Everything you’d expect a CVT to hate, but it took it all. Trying to improve the top end and shifting. Then it was time to dyno.

Early on we had two dyno sessions. One on a dynapack and one on a roller dyno. We found some of Honda’s imposed ECU limits during both sessions. Since the RPM was not accurate through the entire range the numbers still weren’t valid enough for posting. 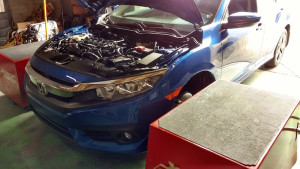 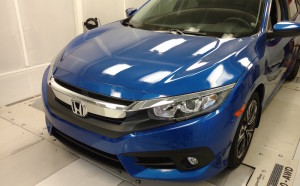 The car lived through WOT test runs on a daily basis for two full months at 19PSI levels before we decided to take on outside testers with a lower 17.5PSI starting point. We’ve always run our car ahead of the public testing curve. At the end of April we had our first public tester loaded up with a tune and the feedback was already good, but on some vehicles throttle pullback was quite extensive. We even offered a refund to one customer because even on the factory tune it was severe and at the time we couldn’t replicate it on our vehicle. We began working on the logic behind the pullback.

As that milestone was conquered our test car was bumped up to 20PSI and our public stage 1 tune was given a solid final level of 18PSI.  We remotely dyno tested the stage 1 tune with one of our international dealers. Our testers had overwhelmingly good feedback on the stage 1 and many of them wanted to try a stage 2 that was in the works, but we hadn’t put enough seat time on it with our own vehicle to allow that yet. We released stage 0 and 1 options to the open public at that point. It had been more than 6 months of rigorous testing by all of our testers for quite a large combined mileage.

As we continued testing and upped our own vehicle to 22PSI and above the final stage 2 settled into a position at 21PSI and we have continued to run our car beyond that level for long term testing. We let our original testers in on stage 2 testing, which they were very happy about. We remotely dyno tested this tune again with our international dealer on the same dyno as the previous runs. Due to popular inquiry we decided to post those dyno graphs with a note outlining the RPM being off. We need an MT on the dyno before 100% accurate results can be posted. VitTuned has now posted MT testing with our staged tunes. See below.

Keeping in mind that we ran this vehicle on a daily basis through multiple WOT runs, these CVTs can handle some abuse. We are more than a year in with our car. Through HOT summer testing in extreme 110+ temperatures here in Phoenix and 30 degree winter weather. Some of our testers are running nearly a year on our tunes as well. Some with even more mileage logged than us. This platform should be given more credit. Well done, Honda.